Betting – or gambling – has probably been around about as long as there have been human beings. In some shape or another people have come together to gamble on various different things as soon as there was something to bet on. But what do we mean by gambling?

At its most simplest, gambling is wagering something of value on a particular event that has an uncertain outcome – with a correct prediction being rewarded. Centuries ago this may have been primitive cultures betting on the weather – with the winners being rewarded with food or weapons. These days betting usually involves money transactions where an individual will bet on something like the outcome of a football match. They then receive money if their prediction comes true. 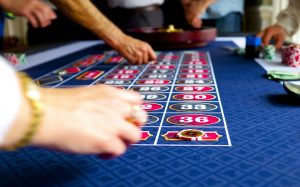 Although we may look back on the early days of gambling as seemingly ridiculous, the basic principle still remains the same today – place a bet on an event while making a prediction of the outcome of that event. These days the definition of the Oxford English dictionary defines betting as ‘the action of gambling money on the outcome of a race, game, or other unpredictable event.

As can be seen in that description, the introduction of a ‘race’ tells us that sport is strongly intertwined with gambling – and probably always has been. Sports are not the only subject of gambling though, as betting just needs an uncertain outcome and two people willing to stake money on different viewpoints.

Although betting in some form or another has evidently been around since the days of early man – there is evidence of cave drawings depicting games of chance for example – the betting world that we know today has come a long way in a relatively short space of time.

With different levels of regulation, betting had been seen as something slightly downmarket up until not that long ago. But the big betting companies have changed the way they operate and expanded from the back street bookmakers to the highly polished websites that are springing up all over the place. Many people who maybe wouldn’t have wanted to associate themselves with gambling previously have now become involved, as the industry has been seen to clean up its appearance.

There have been times in the past – and certain areas of the world even today – that see gambling as something intrinsically bad. Although there are serious issues surrounding betting, the image that the bookmakers and casinos have today is largely positive.

The excitement of making a wager on an event and for that prediction to come true can be understood by anyone – and winning money for doing so makes gambling obviously very attractive. Humans have always like to gamble and it doesn’t look like that seemingly natural trait will be disappearing anytime soon. As long as there are events with uncertain outcomes, people will want to bet on the eventual result.